Welcome to the Wootten’s Pelargoniums pages 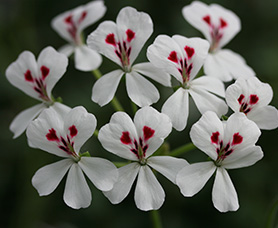 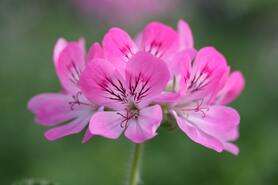 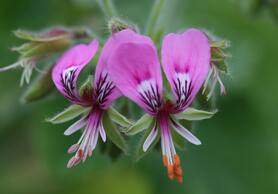 A rare and unique selection of the wild forms of Pelargoniums 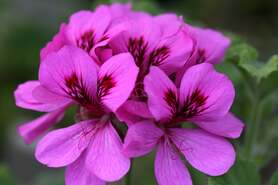 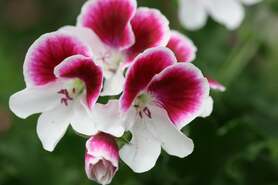 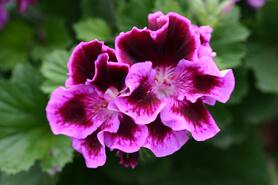 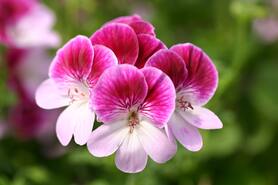 Dainty, petite blooms that carpet the plant all season 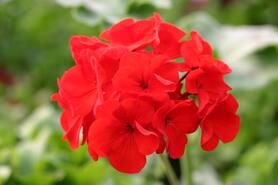 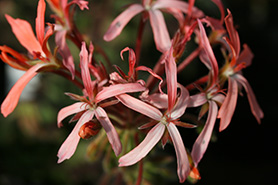 Highly floriferous and eye catching from flower to foliage 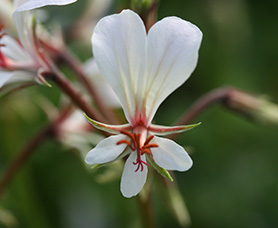 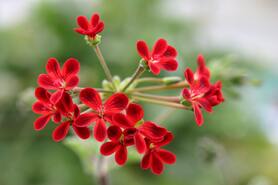 Bred directly from species and dating from the 18th Century to modern day.

Pelargoniums, although not difficult plants, are fussy about potting compost. Multipurpose composts are not really suitable, as they lack structure and quickly collapse and become stagnant. Soil or loam based composts like John Innes are too heavy, Pelargoniums prefer compost with an open structure that does not compact over time.

After many years experimenting we have found that our Pelargoniums grow their best in a peat based compost, or peat substitute based compost. They need coarse lumpy compost that doesn’t compact. For young plants and cuttings make sure you use a fine peat based compost with the addition of grit or vermiculate for drainage. We have recently started using Dalefoot Wool Compost for seeds and cuttings when propagating. This is the best peat free substitute we have found to date. For older plants we use a peat or peat substitute compost similar to Levingtons Original, which although is classified as a multi-purpose it has additions of bark to break up the structure and improve the air content.

From the last frosts in May to the first frosts of October most Pelargoniums can live outside, in fact they benefit hugely from being in the garden during the summer months.
In the winter it is advisable to house them in the greenhouse, conservatory or in the house.
In a mild winter a cold frame may be adequate if the temperature is monitored.

Greenhouse
The Pelargonium greenhouse should be equipped with a heater and kept frost-free at all times. While paraffin and gas burners are cheaper to run than an electric fan heater, they emit a large amount of moisture, which will increase problems with botrytis. Perhaps the best solution for the small greenhouse is to line it in winter with bubble wrap; this cuts down hugely on heat loss and makes an electric fan heater much more economical. A new technological development is the availability of remote sensors, which can be placed in the greenhouse and be monitored in the house. These require no wires and the monitors keep in touch with the sensor by radio signals. On most models if the temperature falls below a programmed level an alarm is triggered, giving you the chance to jump from your bed and clad only in night shirt and wellies…. No more waking in the morning to find your plants all frozen through, their foliage limp and black, the air already fetid with putrefaction! Thus speaks the voice of experience.

Ventilation of the greenhouse in winter. Pelargoniums hate poor ventilation as much as they do frost. Botrytis spores are always present in the atmosphere, but in a well-ventilated dry greenhouse, they will remain at modest levels. Fail to ventilate each day, and botrytis will become a major problem. We open the vent on our greenhouse for a few hours each day, whatever the temperature outside.

Ventilation of the Greenhouse in summer. We leave the vents and doors of our Pelargonium house open all summer, from the end of May to the end of September. Under glass Pelargoniums can suffer in summer with heat stress.

Conservatory – If you’re housing your plants in a conservatory remember to ventilate it in the summer as temperatures in unventilated conservatories can easily reach 50 degrees centigrade, which not only causes the Pelargoniums stress but can provide wonderful breeding conditions for whitefly and other aphids.

Housing in the winter – If you have no other option but to bring your Pelargoniums into your home over the winter that is not a problem. Try to keep them in a light, cool yet frost free room; do not sit them on a radiator to keep warm or nestled up to an open fire! They benefit from temperatures between 5-10 degrees in the winter to rest and sometimes go dormant. Kitchens and bathrooms aren’t ideal due to spasmodic moisture levels. They will require plenty of light over the winter period so garages and dark rooms aren’t suitable.

During November Pelargoniums should be progressively dried out. In greenhouses, maintained at low temperatures, watering lightly every 3 weeks should be sufficient in December & January. The plants should be watered, perhaps, once a week in February. By the beginning of March, they will be beginning to show vigorous signs of new growth & therefore normal watering may be gradually resumed. By April, established plants can be watered every other day, a routine, which will continue until late October. It is important to remember that young plants will always need less watering, because they have less developed root systems. For this reason indiscriminate overhead watering systems and capillary matting are not suitable; plants must be watered individually. Overwatering, particularly in winter is probably the cause of more plant losses than pests and frost put together. Excessive solicitude is the root problem. The gardener, like the convivial host who forces drinks down the throats of his already inebriated guests.

Plants should always be carefully watered, ensuring the leaves receive the minimum amount of splashing possible. This is particularly important in winter, when wet leaves will greatly increase the chances of botrytis taking hold. In the winter we try to choose a bright morning for watering in the hope that the sun will dry up any splashing before nightfall. Alternatively, we water on days with a warm wind and open the doors at both ends of the tunnels to let the wind dry the leaves.

Basic rules of watering – If temperatures are warm watering can be liberal however if temperatures are cool then Pelargoniums prefer to be dry. A little similarly to us humans! Our grower Julie always advises ‘if you’re not sure if it needs water then it’s best not to water it’.

Pelargoniums, when in growth, need feeding. We mix slow release fertiliser in with all our potting compost. The alternative is to feed with liquid potassium fertiliser (I.e. Tomorite) during the growing season. Whichever method is chosen, Pelargoniums should not be fed with a high nitrogen fertiliser, which will encourage excessive foliage & weak growth. High potash feeds will give tighter plants with more flowers.

Remember that wild forms or species Pelargoniums do not require feeding as much as the blousy hybrids. The scented leaf and species forms are not highly floriferous and should be enjoyed for their foliage and form. Many have fairly insignificant small flowers.

Pelargonium cuttings are normally taken in March/April and again in August/September. If possible cuttings should be nodal rather than internodal and should always be taken from fresh new growth. Cuttings for larger varieties may be up to six inches in length, although for short jointed varieties such as angels they may be only as much as an inch. To encourage a flush of suitable growth many growers cut back their stock plants hard, about a month or so before the cuttings are required. Before inserting the cuttings in the compost pinch off the lower leaves, leaving just two leaves at the top of each stem. With larger leaf varieties, it is advisable to trim the leaves down to about half their size; this reduces transpiration, which the rootless cuttings can ill sustain; it also improves air circulation between cuttings, thus lessening the chances of botrytis. We do not use hormonal rooting powder on our cuttings as we have found it to make no significant difference apart from providing a fungicide. We root our Pelargonium cuttings in plug trays. This provides even spacing and protects cuttings from cross infection. It also allows rooted cuttings to be potted on without root disturbance. Shade cuttings during hot weather. Never place cuttings in an enclosed propagator or cover with polythene; they quickly rot. Bottom heat does help rooting in the cooler months. Rooting normally takes places within four weeks in the spring and sometimes longer in the autumn.

With experience, growers can tell at a glance if a pot of cuttings is rooted – immediately after rooting, the cuttings put on a flush of new growth.
Potting and repotting can take place any time between February and early October. When potting or repotting, it is most important to choose an appropriate pot size. This will not only depend on the size of the plant and its rootball, but also on the vigour of the variety. Vigorous varieties such as P. tomentosum, or P. paplionaceum, when potted up as rooted cuttings, should be put straight into an11cm. pot. Less vigorous varieties such as P. Deerwood Lavender Lad or P. Angel Eyes Orange must not be overpotted and should be put first into a 7cm. pot. It is particularly important not to overpot in early spring or autumn. When plants are growing strongly, during the warm summer months, the risks are much less. When plants have been grown into large specimens and it is impractical to put them into a larger pot, their vigour can be maintained by removing them from their pot, rubbing off a portion of the old fibrous root and compost, and placing them back in the old pot with fresh compost. We repot our entire collection of Pelargoniums once a year, in August.

Pelargoniums need constant stopping, during the early stages of growth. If left unpruned, they will never achieve the strong woody growth, which is necessary for them to make shapely robust plants. Nipping back will delay flowering, but will give you large well rounded, sturdy plants, which can carry dozens of flowers, rather than one leggy stem, struggling to support a single flower. Some plants need more nipping back than others. Decorative Pelargoniums are very prone to put on excessive sappy growth if left unchecked. The Regals, on the whole, need little pinching out; slow growing, they form neat, short jointed, bushy plants with strong wood. The Scented and Uniques are a mixed bag. Most of them produce strong wood. However some like P. Deerwood Lavender Lad and P. abrotanifolium are all exceptionally lax growers and will need frequent stopping. The angels are mostly compact; P. Tip Top Duet and P. Jerey being exceptions and requiring regular pinching out.

In autumn, plants need severe pruning, to reduce the quantity of foliage, and ensure good light penetration to all parts of the plant and good air circulation between the foliage. If plants are left unpruned, there will be insufficient light for the lower foliage, and stagnant air will collect in the centre of the plant, greatly increasing problems with botrytis.

When pruning Pelargoniums, always cut them back to just above a node. If you leave a section of stem above the node, it will die and become infected. To seal the wound we now use neat liquid bleach applied on the tip of an old watercolour brush. The liquid bleach will both act as fungicide and create a very alkaline environment in which bacteria will not thrive. All cuts should be inspected at regular intervals throughout the winter for signs of infection. If the cut does become infected, it must be cut back to the next node.