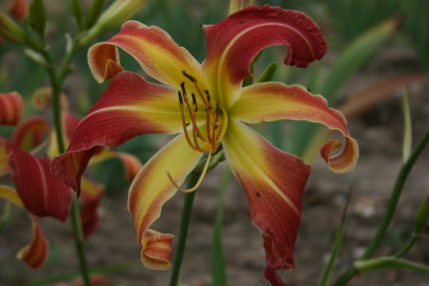 The name Hemerocallis originates from ancient Greek, ‘Hemera’ meaning ‘Day’ and ‘Kallos’ meaning beauty, this gives rise to their common name of Daylily which represents the fact that each bloom only lasts for one day. Whilst this is true, it should not put you off the plant as each plant produces hundreds of blooms across their flowering season which can last up to 60 days.

Hemerocallis are forms of Herbaceous Perennials and deciduous or ‘dormant*’ forms do die back to their root system each winter. However there are many evergreen and semi evergreen forms that hold their leaves all year round.
*an American term for the plants deciduous behaviour
For many years Hemerocallis were registered within the botanical family of the Lily, Liliaceae. However, they have been reclassified and now belong to the family Asphodelaceae with their own sub family Hemerocallidoideae.
Hemerocallis are native to Asia, predominantly China, Korea and Japan and have been documented in Chinese culture for thousands of years. They were historically used in medicine, and are still used as a food source in Asian cooking. Whilst all parts of the plant are edible, preference is given to the sweet flavour of the flower buds and the tubers are often cooked like the common potato.

The structure of the plant consists of the following:

Hemerocallis are Monocotyledons and produce one seed leaf, similarly to Grasses, Crocosmia and Iris. Many have tuberous root systems enabling them to store food efficiently over the winter and begin shooting much earlier in the spring than other fibrous rooted plants.

Although plants have been documented in the far east for many years, Hemerocallis only reached European shores in the mid-15th century and throughout the breeding boom of the Victorian era weren’t really considered worthy plants for hybridising.
The turning point in daylily history began in the early 20th Century when two botanists began collecting seeds and breeding plants, Canadian Botanist Dr Albert Steward, working at Nanking University in the 1920’s, and American botanist Dr Arlow Stout. Steward sent seeds and plants from China to Stout in America to hybridise, Stout received around 50 shipments of plants at this time and in his lifetime attempted over 50,000 cross pollination experiments resulting in 100 viable hybrids.

Arlow Stouts book entitled ‘Daylilies’ 1934 can still be purchased today and is a fascinating insight into his work. In his book Stout lists just 15 known species of Hemerocallis, since then another 8 have been identified by a Chinese Dr, Shui-Ying and possibly further more since then.
From these few species we now have in existence over 40,000 different hybrids. Many of which have been bred in America and are only available there.

Within the species there are two types of bloomers – Diurnal, meaning the blooms open during the day usually early morning and Nocturnal, meaning night opening and often open early evening, the nocturnal forms are the more fragrant of the two.

As breeding took off in the 1960’s breeders were trying to find new methods to increase the Daylily colour range, make larger more ruffled flowers and lengthening the blooming period.
A result of these experiments was the discovery of using ‘Colchicine’ a highly poisonous chemical alkaloid derived from Colchicums which when artificially introduced in the breeding altered the chromosome count in the Daylily from 22 chromosomes (Diploids) to 44 chromosomes (Tetraploid)
The results are plain to see in our hybrids of today: 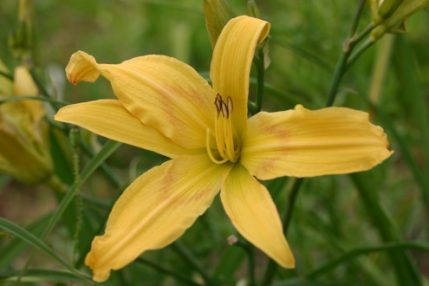 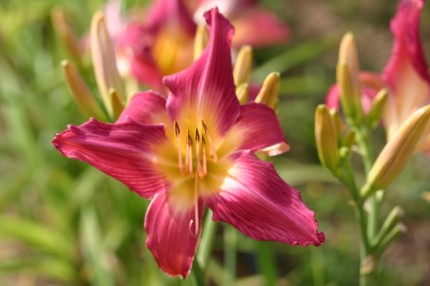 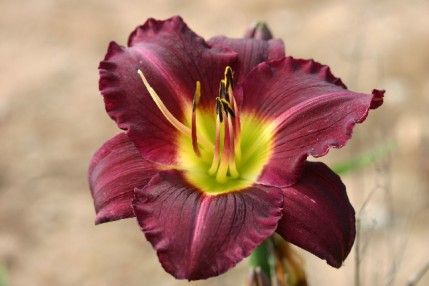 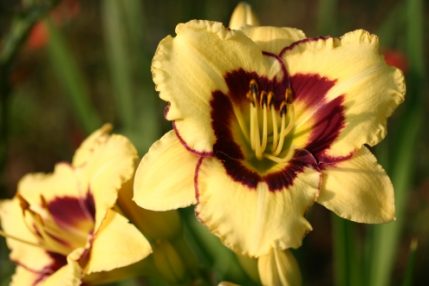 Tetraploid forms were claimed to have 1/3 larger blooms, more intense colours and the ability to withstand heavy rainfall and hot sunshine without bleaching. They were bred for greater vigour, winter hardiness and disease resistance
In our experience of growing daylilies we have found no difference in their growth to other diploid forms, and whilst their breeding increased the colour range and patterning at the time, newer diploid forms have just as wide a range of tones.
At Woottens our preference is always towards the more elegant forms, whether it’s Irises, Pelargoniums or any other perennial so our love lies with the diploids, but also with newer hybrids bred from them called ‘Spider’ forms.

Spider forms of Hemerocallis came from early breeding of some nocturnal species, H. altissima and H. citrina with additions of diurnal species, H. fulva.
As the name suggests the flowers have a ‘spider’ like appearance, long thin petals that often dangle like spider legs!
Disregarded during the breeding of Tetraploid forms, the spider regained notoriety in the 1980’s and a new wave of interest in the 1990’s bought these plants back into the limelight and sparked off a whole new world of Hemerocallis breeding including many unusual flower forms as shown below: 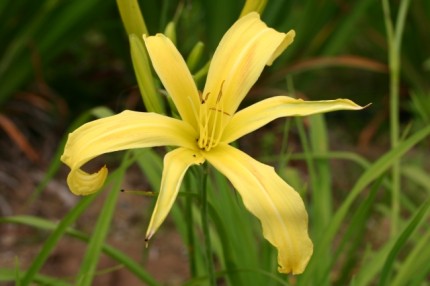 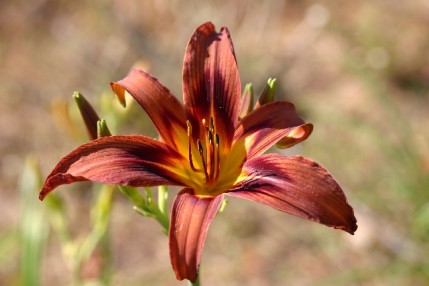 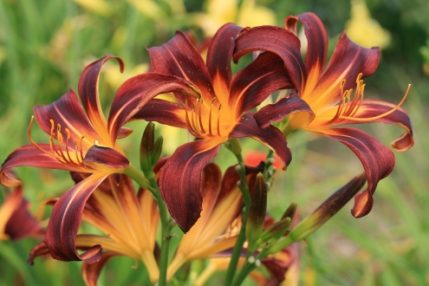 Modern flower forms include elaborate shapes with wacky shape names such as : Baroque, Pinched and Curled, Cascade, Flamboyant, Cockeral crispata, Pinwheel crispata and Butterfly crispata. These forms are quite rare and we stock just a few, these aren’t always on our sales list but availability can be enquired about by emailing info@woottensplants.co.uk .